Honza and Claudine Lafond have built a life together following their bliss and teaching AcroVinyasa, the practice that takes yoga from Earth to Air.  In a previous TryBelle Magazine article they talked about the yoga practice of AcroVinyasa and the business they’ve built at YogaBeyond.  Today, they bring you their love story.  Warm, enduring, and elevated, a message of true partnership that takes LOVE from earth to air. 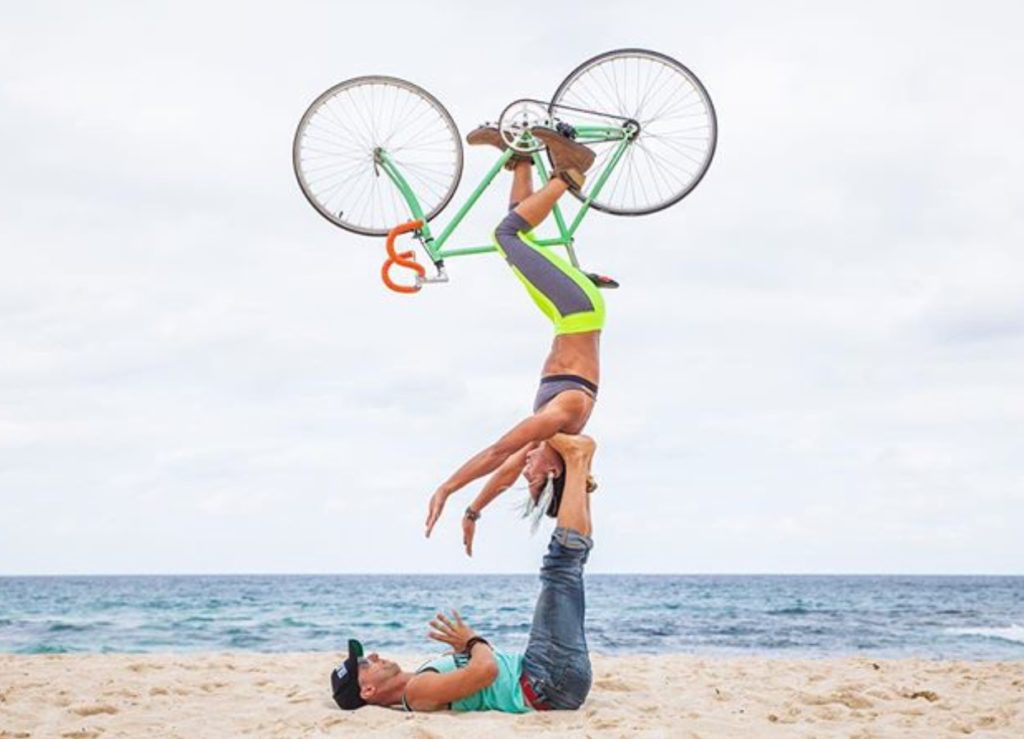 By Honza and Claudine LaFond

Claudine:  I grew up in New York in an extended family setting with a mix of cultures and languages. We spoke French at home and celebrated both Catholic and Jewish holidays. I am a blend of Haitian, Polish and Americana and am very proud of who I am and where I’ve come from. I’ve always been active and healthy.

My parents would take my brother and I across the world from a young age for their work in the clothing industry so we were exposed to fresh, tropical foods from a young age and developed a palate and appreciation for delicious, nutritious foods.

I have been involved in all sorts of movement from a young age too. Practicing ballet, starting jujitsu at the age of 7, playing softball and finding yoga at 14 has kept me pretty active, happy and fit!  My upbringing consisted of lots of travel and adventure. My parents instilled in me an openness and confidence that allowed me to believe that anything is possible. Honza grew up on a farm in the Czech Republic, spending many hours playing with animals and connecting with nature. We have both become very free spirited and grounded people which enabled us to connect with a great deal of ease. 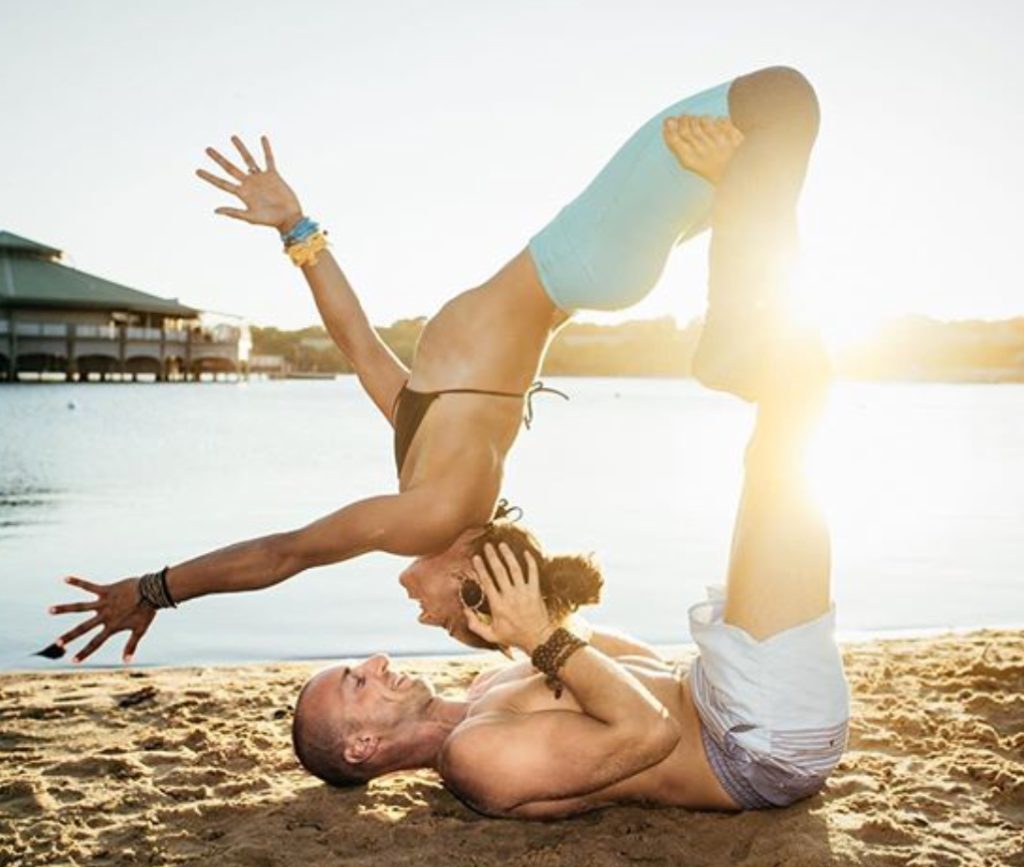 Our love story began from opposite corners of the world. True to our life philosophy of ‘following your bliss’, overcoming 10,000 miles apart simply meant another exciting adventure on our journey toward finding each other. We finally met in New York in 2007, and currently call Sydney, Australia our home away from home.

Honza and I physically met in NY though we had been introduced by my godmother from 10,000 miles apart. I was running a yoga studio in Queens, and Honza had a full time business as a personal trainer. When Sherri, my fairy godmother as I now call her, sent me an email saying that, “If there are two people in this universe that had to at least meet, it is Honza and you.”  Well I knew that I had to pay attention.  I wrote him a brief message about who I am, where I’ve been, and where I’m headed, and when he wrote back within hours sharing so much more of the same, I knew we were on to something.” 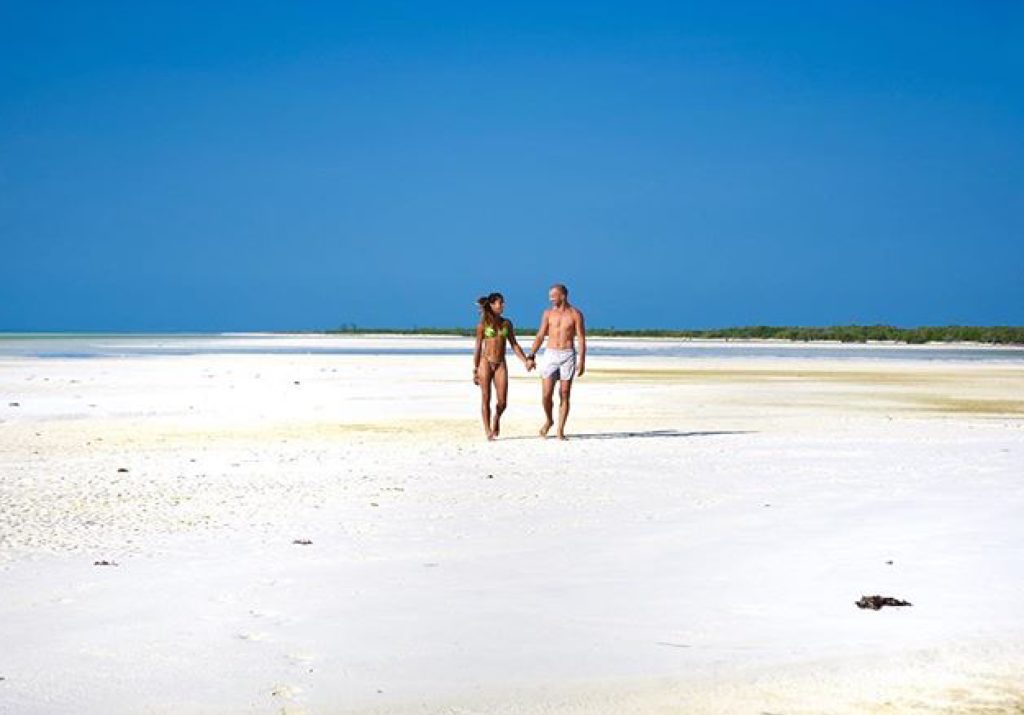 Honza: After many personal journeys and self-enquiry, I knew that I was ready to call in the love of my life. So when we began to communicate, I knew Claudine was the person with whom I was going to spend the rest of my life. As we got to know each other more through email, photos and phone calls we realized that this love was written in the stars.

A few months before we ever knew of each other, I had made a painting and finished faster than I ever had before. The image was of two figures, a man and a woman gazing at another woman with curly hair in the distance. I didn’t know what the painting was about at the time. I named in Cosmic Imagination and wrote my favorite quote from Albert Einstein on the back of the piece. ‘Imagination is everything, it is the preview of life’s coming attractions.’ As Claudine and I were talking, she told me about her meditation teacher in India giving her a Sanskrit name, Kalpana, which means Cosmic Imagination. I bought a plane ticket to NY the next day to meet my woman in the painting, the love of my life. 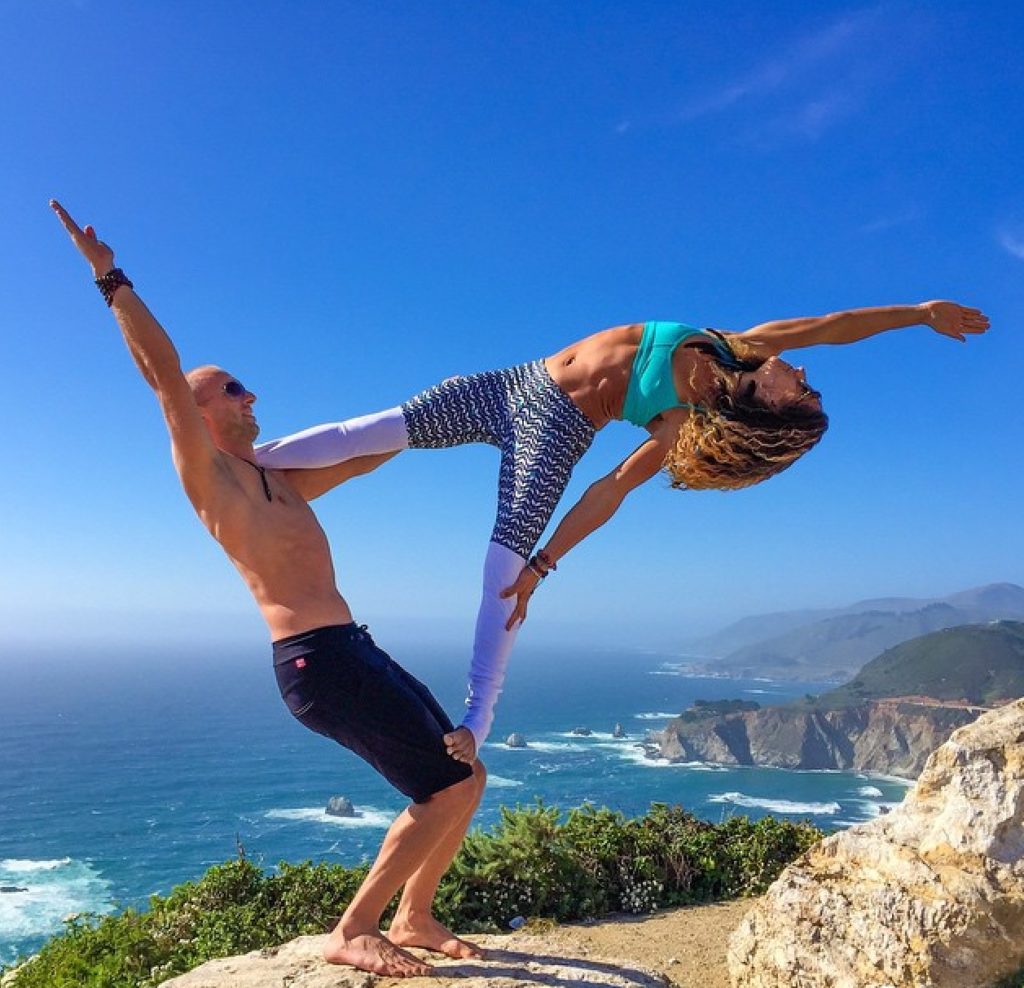 Claudine:  After an incredible and surreal month in NY, Honza invited me to move back to Sydney with him. At the time, it felt like the next logical step. So six weeks after he left, I bought a one way ticket to Australia! This was almost eight years ago and it has been an amazing ride, ever since.

Since meeting eight years ago, we have explored many different endeavours but what has made the most sense was to find a way in which we could work together and earn a living whilst travelling the world. In choosing to do this and ‘follow our bliss’ as we often say, we have inspired many others to follow their own bliss.  We also make sure to practice the gifts of yoga in our daily life. We constantly practice patience, mutual respect, contentment, non-attachment, surrender and compassion. It is so important to be honest with yourself on and off the mat. In a relationship, this is paramount and we do our best to do our work and practice our yoga every day, on the earth and in the air, with love.

Setting Intentions in Yoga Brings Purpose
Sailing to the Other Side with Boat Pose
Bridge Pose in 10 Easy Steps
Meditation Circulation and Staying in the Flow
We use cookies to ensure that we give you the best experience on our website. If you continue to use this site we will assume that you are happy with it. Third party vendors, including Google, use cookies to serve ads based on prior visits to this website or other websites. Visit Privacy policy. OkPrivacy policy